Six very interesting gigs are going to happen. Line up:


I decided to update this page more regularly, so let's start with couple of very important dates for me! I'm very happy to announce that I will be going to Estonia at the end of February to play four concerts there. The line up is:

We will play the music from "deComposing Cats" and couple of other tunes as well. I'm very much looking forward to this one!


If Estonia is too far for you, there are interesting things happening in Austria as well! I'm going to play two concerts in March with my newly formed trio. This time I'm supported by two young and very talented gentleman:

Other dates are coming up as well, so stay tuned!


On April 11th I'm going to have a concert with Major Blues Club in Reigen (Vienna) as a part of Vienna Blues Spring! The line up is really a killer! :)

Dont't miss this one, it's going to be a lot of fun!


I'm so excited to announce my new project called "Daily Solo"! I will be posting one solo every day to my youtube channel.

You can watch the videos at www.youtube.com/mickyleeband. Don't forget to subscribe, so that you don't miss any videos :)

I'm very much looking forward to your feedback!


There are going to be 4 gigs with my very good old friend Ivan Ristanovic on vocals in January! Ivan and I played one gig in duo couple of months ago. Since we had such a great time then, we decided to form a band. It's a duo and we perform the world known pop and rock hits in our own arrangements. Ivan is also the beat-boxer. With his powerful loop machine and effects he can create a lot of great sounds and layers. If you are around, don´´ miss the opportunity to hear us live, it's going to be a lot of fun :)


I´m very excited about the two gigs I´m going to be playing in Belgrade at Jazz Club Cekaonica on November 13th and at the Novi Sad Jazz Festival on November 14th!


Recently I´ve been doing some guitar arrangements for probably the best and the biggest online sheet music company, called Virtual Sheet Music Inc. Until now, we published two collections, which you can find at the following links:

and, hopefully, many more will come :)
For the small annual fee you can download tons of high quality music sheets, with almost every possible instrumentation. The owner of the company is a very cool guy, called Fabrizio Ferrari, who will help you with all the questions you might have regarding the music on the site. He also runs one of the greatest communities for the musicians on the web, called Musicians Page. There you can sign in and make your music profile for the other colleagues to see. Also, there are music jobs posted daily! CHECK IT OUT!

On June 9th and 10th I´ll be teaching at the new and exciting 2012 at NYC Jazz-Workshop in Mattighofen with Andy Middleton, Martin Reiter, Chanda Rule, Raphael Preuschl and Gernot Bernroider.

There are still couple of places available so hurry up and book it, it´s going to be lots of fun! We are also going to play a concert with my music on 9th of June (venue to be announced) which I´m really thrilled about!

June 15th 2012 at Kulturzentrum in Mattersburg with Jazzbransch. Start at 8pm.


June 16th 2012 at Unplugged in Vienna with Matthias Schneider Band. Start at 9pm.


May 17th 2012 at Tunnel Vienna with Inspirational Corner. Start at 9pm.

May 22nd 2012 at Musikwerkstatt Wels. MICKYLEE Band with special guest Aaron Thier on drums! Start at 8pm.


May 30th 2012 at Fledermaus Wien with Inspirational Corner, featuring Big John on vocals. Start at 10pm.

May 31st 2012 at Capatosta Wien with Inspirational Corner (trio). Start at 9pm.

If you are around, check it out! 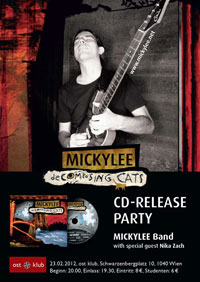 We are going to be supported by the great fusion band from Belgrade, Serbia GISMAJES!

I´m looking forward to seeing you all there!

I´m proud to announce that my album deComposing Cats is available for purchase! Currently you can buy it exclusively through this website. The price of the CD is 14€ plus postage. Please, CONTACT me for further details. In the meantime, you can listen to the samples on the AUDIO page.